The liberal media’s efforts to hide Joe Biden-related scandals from voters and bury good news about the Trump administration cost the president the election, according to two new voting surveys.

Had voters known about troubling issues swirling around the Democrat and some of the successes of the Trump White House, including the Middle East peace deals, job growth, and energy independence, enough people would have turned away from Biden to give Trump 311 Electoral Votes, more than enough to win, said the polls shared with Secrets.

Ripping the media, Brent Bozell, founder of the Media Research Center, said, “Had they done their jobs, Donald Trump won the election.

Bozell added, “This is not happenstance, this is not coincidence.” 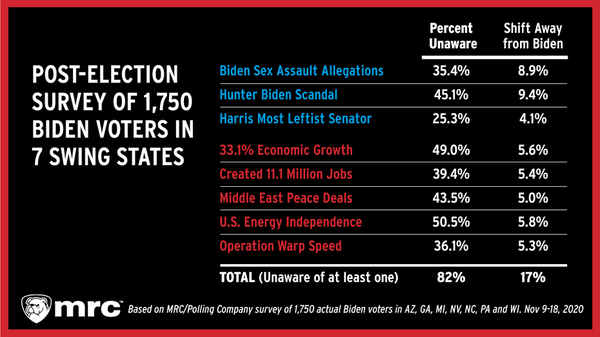 What's more, the media had a partner in Twitter, which Bozell said censored Trump, his campaign, or family members 262 times during the end of the campaign. Biden’s team was never censored.

In one survey for MRC by McLaughlin & Associates, enough of Biden’s voters would have switched their selection had they known about his son Hunter’s money scandal to give Trump a victory. In that poll, 4.6% of Biden’s voters said they would not have selected him had they been aware of his son’s China money affair.

In the second, done by the Polling Company for MRC, 17% of voters would have shifted away from Biden had they known about Biden's scandals and Trump's achievements. 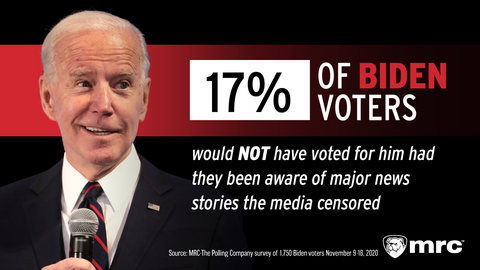 A survey of voters in the key battleground states of Arizona, Georgia, Michigan, Nevada, North Carolina, Pennsylvania, and Wisconsin, found enough Biden voters switching to give Trump the win in each state. The survey did not assume that those voters leaving Biden would shift to Trump, showing how close those races were.

Bozell’s group has been critical of the media during the Trump years, and during the election, he said that the press hid or muted reports about sexual assault allegations against Biden, the Hunter Biden affair, and scorecards showing that running mate Sen. Kamala Harris is the Senate's most liberal member.

The Polling Company survey also found that up to half of Biden’s supporters didn’t know about key Trump achievements, including recent economic growth and the program to speed coronavirus vaccines called “Operation Warp Speed.”

He urged Republicans and conservatives to shift away from the mass media and take their stories to social media. “We have to give up on the national news media,” he said in a call with conservative leaders.